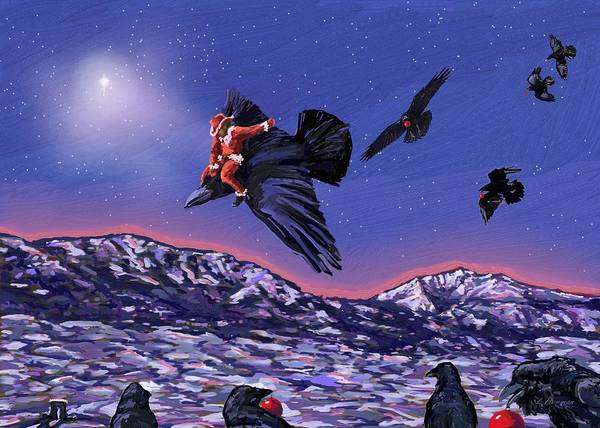 Santa's Scout art print by Les Herman.   Our art prints are produced on acid-free papers using archival inks to guarantee that they last a lifetime without fading or loss of color. All art prints include a 1" white border around the image to allow for future framing and matting, if desired.

This is the 2018 annual raven Christmas card. I've been creating the card for just over 15 years. A group of us began working for the NPS at Canyon... more

This is the 2018 annual raven Christmas card. I've been creating the card for just over 15 years. A group of us began working for the NPS at Canyon Village in Yellowstone Park back in the mid-70's. We had a thing for ravens. Our recreational baseball team we named the "Raven Idiots". Since then, we've remained close friends. This card is a celebration of Gardiner, MT, Yellowstone Park and raven idiots. Three prerequisites for the Christmas card; Electric Peak, the Roosevelt Arch and of ravens. Enjoy!